Cooking is more fun with friends. Invite your friends to join Slurrp Community and share your special recipes with them
Chef Tej Wardhan Mixes Indian Cuisine With European Flavours
Updated : September 03, 2022 05:09 IST
Share
By infusing Indian flavours in European delicacies and vice-versa, there are plenty of unique dishes that one can come up with
The idea of creating fusion dishes is no stranger to us. Throughout the lockdown, one has witnessed a plethora of such creations. However, only some of them have gone well with the food lovers. With a similar motivation to offer their patrons a new experience, Executive Chef at Café De’Lan, Tej Wardhan Saini, infuses the European and Indian palates to bring to the table some of the most delectable dishes.
Also Read: MasterChef Finalist Oindrila Bala Talks About Bengali Cuisine
The chef has been actively involved in giving a modern touch to Indian food with his innovative recipes and knowledge of ingredients. Knowing the contrasting tastes of Indian and European consumers, he believes that the trick lies in achieving a balance between the two. While some dishes like the Naples style pizza have been kept in its original form, some others like biryani are served with a seafood twist. With newer and better ideas taking shape each day, Chef Tej envisions a culmination of progressive Indian cuisine with contemporary European flavours. 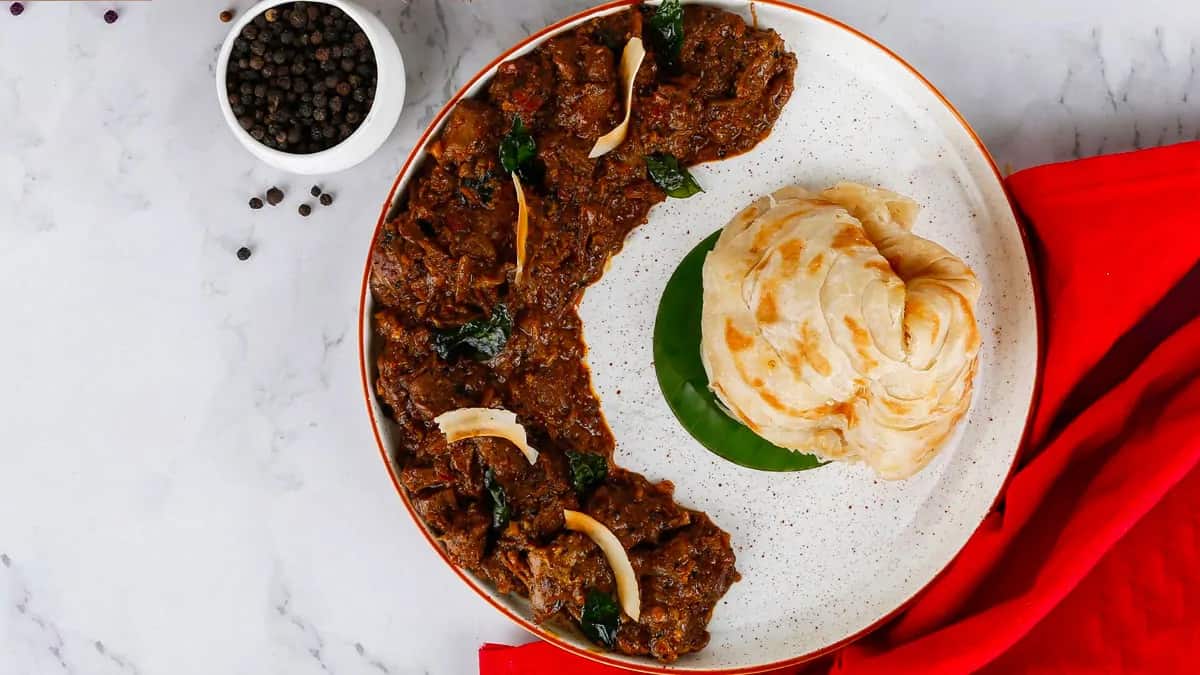 Lamb Boti Pepper Fry
In an exclusive tête-à-tête with Slurrp, Chef Tej delves into the techniques of blending the two distinct cuisines while retaining their nuances and mastering the art of cooking with alcohol. Excerpts:
Q1. What are the nuances of European cuisine that make it stand out?
The uniqueness of European cuisine comes mostly because of the mix of cultures. In a small continent, there are various nationalities with different cultures, which translate to the vast variety of food Europe has to offer. The vibrant agricultural produce, significant portions of meats, exquisite varieties of cheese and extravagant use of liquor in the cooking processes are some of the reasons that make European cuisine so popular and one of the most loved cuisines across the globe.
It is one of the few cuisines that utilise almost all the cooking methods like stewing, braising, sautéing, boiling, and roasting, etc. The other point that makes it stand out is the subtlety of flavours in European food, characterised by the use of more herbs like thyme and rosemary and lesser spice powders. This highlights the stark difference between European cooking and Indian cooking too.
Q2. Throw some light on progressive Indian cuisine and how do you infuse it with European flavours?
With the ever-progressive hospitality industry, Indian food has also evolved over the years on a global scale. India is such a diverse country both culturally and in the culinary aspect, there are so many regional dishes and cuisines that need to be showcased at a global level. Progressive Indian food involves the use of global quality ingredients to create classic Indian dishes. A perfect example from our menu at Café De’lan is the signature butter chicken, which is made using heirloom tomatoes. Another fine example is our amchur paneer tikka, which is paired with a pesto flavoured pachadi. The basil-flavoured chutney compliments the paneer tikka perfectly.
Gone are the days when Indian food used to be just curries in a bowl along with breads. Keeping in mind the authentic flavours with intelligent experimentation, plating the food as a piece of art that speaks a story is the beauty of Indian cuisine when presented the progressive way.
Q3. You spoke about the extensive use of alcohol in European cooking. What all should be kept in mind while adding alcohol to any dish?
Like salt, alcohol brings out the flavour in food. Whether you’re cooking with wine, beer or liquor, the alcohol in those beverages improves the flavour perception of the dish being made. Contrary to popular belief, the alcohol added to a dish does not ‘burn off’ during cooking. How much is retained in a finished dish is determined by several factors like the amount of alcohol added, the amount of heat applied, the cooking and standing time, etc. If your aim is to put on a show, flambé is the way to go, but if you’re trying to reduce the amount of alcohol in a finished dish, the most effective method is to simmer or bake the mixture in a wide uncovered pan for an extended period of time.
Q4. The prawn star appetiser is made with bourbon whiskey. Can you elaborate on the process of making it?
This is one dish we at Café De’lan recommend to all our patrons who relish seafood. The bourbon adds a mildly sweet and smoky flavour to the dish and the fresh cream and parmesan cheese give the dish its signature creamy and smooth finish.
Here’s the recipe. 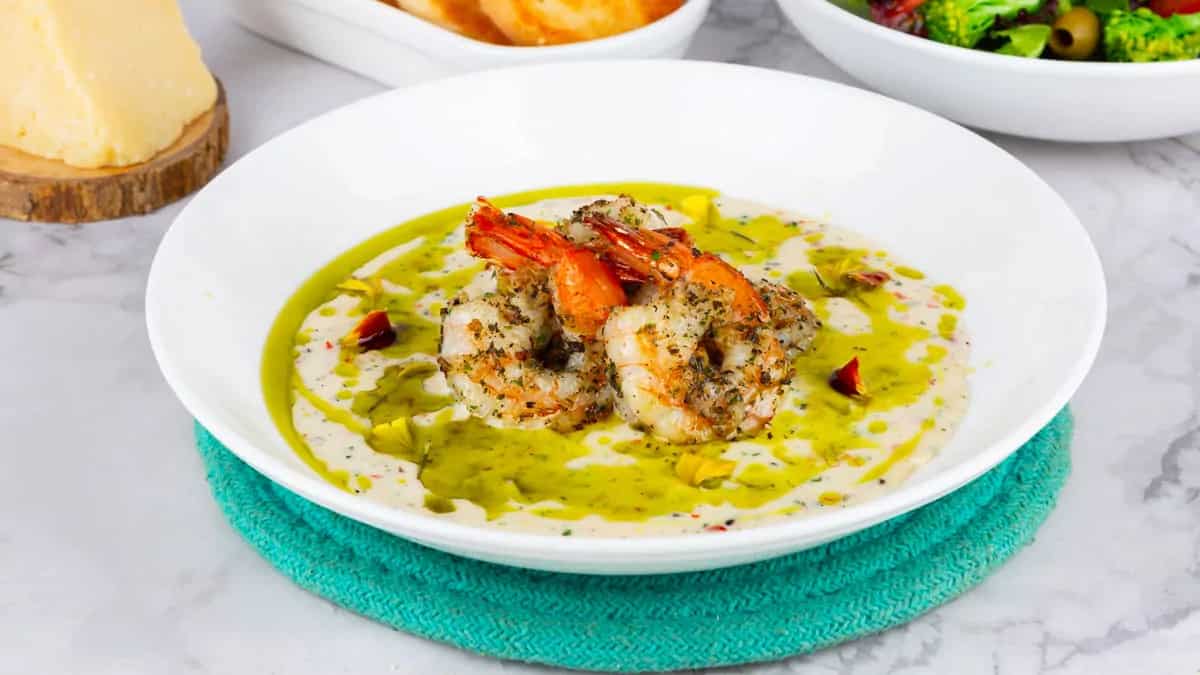 Prawn Star
Ingredients:
Method:
Q5. Since you specialise in Naples-style pizza, can you tell us how it is different from a regular pizza?
Most of the places in and around Delhi NCR are doing regular pizzas, which are technically called roman pizzas. We, at Café De’Lan, are offering our diners the most authentic Naples style pizzas. The Naples-style pizza is actually the oldest and most authentic style of pizza making which originated in Naples, southern Italy. These pizzas are very simple, with a big emphasis on the dough and the crust as these are considered the star of the show. The crust is puffed up and nearly hollow inside which is called ‘cornicione’ in Naples. Naples style Pizza
The main difference between the pizza of Rome and Naples comes from the dough. In Naples, it is made with flour, yeast, water and salt whereas in Rome they add olive oil which means they can stretch the dough to be thinner. While both incorporate a thin pizza crust, the texture of the two is very different. Neapolitan pizza has a very thin crust at the base, with dough that puffs up around the sides and provides for a very airy crust.
Q6. A fusion dish that you’re very proud of and what’s the taste like?
Well, it’s a dish which is coming soon on our new menu. It’s a Malabar sabzi quesadilla with a spicy pico di gallo salsa. It is our very own Indian take on the famous Mexican dish. The crisp Malabar paratha filled with exotic korma veggies and layered with cheddar cheese is the perfect start to any meal.
Download the free Slurrp app.
©2022 Slurrp, HT Media Labs. All rights reserved.
Slurrp is a recipe aggregator that helps one find recipes based on one’s diet choices, fitness goals and taste preferences. It provides calorie-counted recipes across cuisines and meals types and caters to all levels of cooking skills — from a beginner to an expert. It also offers a nutrimeter that calculates the precise nutrient intake based on the user’s height and weight to recommend recipes for each meal. Once you’ve shortlisted recipes that you want to prepare, you can also add them to your Meal Plan which pins your recipes on the calendar so you can plan your meals in advance.