Cooking is more fun with friends. Invite your friends to join Slurrp Community and share your special recipes with them
test
Anglo-Indian Cuisine: An Insight Into The History Of This Culinary Delight
Updated : November 09, 2022 03:11 IST
Share
Anglo-Indian food is a heritage food that is gradually fading away from the culinary scene due to the dwindling population of Anglo-Indians
Anglo-Indian cuisine is a fusion food which developed when the British ruled over India. It flourished as English officers married Indian women,and some English women married Indian me. As with any multicultural situation, the food had to be remade, re-adjusted and cooked to favour the English palate.That’s how Anglo-Indian cuisine was born.
Apart from the obvious British influence on Anglo-Indian food, there are also those of the Dutch, Portuguese, and French. The cuisine also has many dishes that are named after British colonial institutions, like – dak bungalows, canteens, railways, and clubs.
Anglo-Indians were officially listed as a minority group in India’s Constitution in 1950. Most of them live in Mumbai, Kolkata, and Chennai, and are very passionate about their food which is based on Indian and British recipes. Every Anglo-Indian loves to sing, dance, and enjoys a hearty laugh. Some dances that they enjoy are the jive, the waltz, and the tango.
How Did Anglo-Indian Food Start?
When the British first came to India, they only consumed rice, bread, porridge, and bread pudding, but soon they were altering typical British foods to suit the Indian climate. British traders were not allowed to marry Indian girls, but that eventually changed. Some even began bringing English women from Britain to marry Indian men. With inter-marrying on the rise, a distinct Anglo-Indian culture and cuisine evolved, comprising dishes that the British adopted in their Indian environment. Even today, Anglo-Indian cuisine is appreciated as a unique, trendsetting blend of cultures and foods.
The British had to import a lot of their cooking utensils to be able to cook their food in India. The kadhai, or wok, to sauté the vegetables, the Tawa to fry meat, and the pan to boil rice became a standard presence. Anglo-Indian families would cook rice, dal, and omelets as they were suitable to their acquired western palate. Most Anglo-Indian dishes use mild Indian spices and ingredients. For instance, an Anglo-Indian dish like aloo-gobi will usually be a mildly-spiced stew of potato and cauliflower, instead of the typical Indian-style preparation. An Anglo-Indian Chicken curry is made with fresh ingredients and mild spices; it also looks and tastes different from a typical Indian curry. 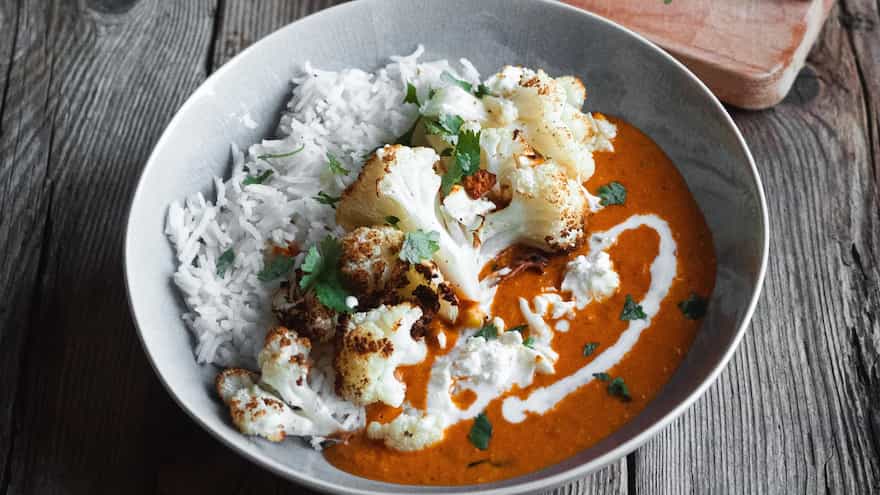 Anglo-Indian versions of curries are often mild and less spicy | Unsplash
Different Types of Anglo-Indian Recipes
The Anglo-Indian community has some treasured recipes that have been handed down the generations. Some examples are the Chicken Pot Roast, which is based on the British recipe for Pot Roast, but altered with Indian spices like cinnamon, peppercorns, coriander leaves, and more. A typical Anglo-Indian family would cook a lazy Sunday meal consisting of Coconut rice and Ball curry. Meatballs or koftas are slow-cooked in tomato gravy and served with delicious yellow coconut rice.
Mutton Vindaloo, a popular Anglo-Indian dish, was originally brought to India by Portuguese sailors and adopted by the British in the 18th century. The Portuguese would use wine and/or vinegar to preserve meat for long durations of time,which resulted in an Anglo-Indian dish called Vindaloo.
Jhalfrezi is also a popular Anglo-Indian dish. Jhalfrezi means ‘spicy hot’, and so this dish is made with meat/chicken, and some vegetables cooked and served in a spicy sauce. Potato and meat mince cutlets are another Anglo-Indian delicacy heavily influenced by the British, French and Portuguese. Itis usually taken with green chutney, dal, and rice.
The first Anglo-Indian cookbook was published in 1796, and was followed by many since then. Anglo-Indian food is extremely popular in southern India, especially in Kerala, which was a popular escape for British traders during the hot Indian summers. There are many families in Kerala that cook Anglo-Indian food at home even today.
Kolkata is a city where many of Anglo-Indian families settled over the centuries. They The community lives in different parts of the city, like the heritage Bow Barracks, where British soldiers were stationed during World War I. The Anglo-Indian community in Kolkata is close-knit, and hosts many events like hockey tournaments or annual football tournaments that showcase the talent among the young Anglo-Indian boys and girls.
Anglo-Indian food is a heritage food that is gradually fading away from the culinary scene due to the dwindling population of Anglo-Indians. Many from the community have migrated out to England and Australia over the decades since India’s independence. However, the community is active on social media, and various online Anglo-Indian groups are reviving this fusion food, and helping many to learn how to cook Anglo-Indian food at home.
Download the free Slurrp app.
©2022 Slurrp, HT Media Labs. All rights reserved.
Slurrp is a recipe aggregator that helps one find recipes based on one’s diet choices, fitness goals and taste preferences. It provides calorie-counted recipes across cuisines and meals types and caters to all levels of cooking skills — from a beginner to an expert. It also offers a nutrimeter that calculates the precise nutrient intake based on the user’s height and weight to recommend recipes for each meal. Once you’ve shortlisted recipes that you want to prepare, you can also add them to your Meal Plan which pins your recipes on the calendar so you can plan your meals in advance.

By Suphatra SephariNovember 13, 2022CuisineComment on Anglo-Indian Cuisine: An Insight Into The History – Slurrp